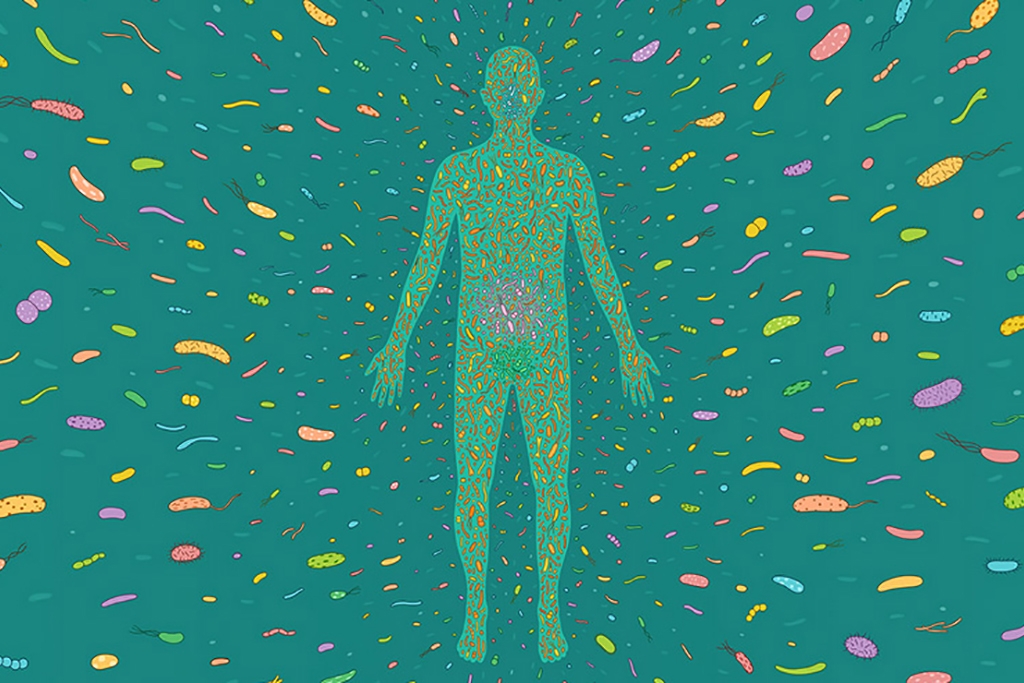 Enhance your gut microbiome through diet, sleep, and exercise. The ιντεστιναλ microbiome is a dynamic feature of the gastrointestinal tract that affects the health of the whole body. The gut microbiome can significantly influence the pathogenesis of conditions such as cancer, metabolic syndrome, inflammatory bowel disease, non-alcoholic fatty liver disease, and many other diseases, through complex interactions with the immune system and various biochemical pathways.

Recent technological developments greatly aid, on the one hand, the understanding of the gut microbiome, and on the other, the possible mechanisms by which microbiome changes can have beneficial effects on health.

A wide range of carbohydrates, including prebiotics found in food, fibers, and milk oligosaccharides, have been shown to cause significant changes in the intestinal microbiota.

The indigestible components of food, which are called prebiotics, can beneficially affect human health by selectively stimulating the growth and the activity of one or more bacterial species in the large intestine. To qualify a food as prebiotic, it is required to be resistant to gastric acidity, hydrolysis by enzymes, and absorption from the upper gastrointestinal tract, in order to be fermented by the intestinal microflora and produce short-chain fatty acids (mainly acetic, propionic, and butyric acid), substrates which can be used for energy production. Thus, prebiotics can not only induce changes in the microflora by supporting the development of a specific intestinal microbiome, but they can also serve as substrates for the production of biologically active metabolites. The most important prebiotics are inulin-type fructans, fructooligosaccharides (FOS), but there are a number of others, including galactooligosaccharides (GOS). Fermentation of prebiotic carbohydrates yields butyric and other short-chain fatty acids, as well as other end products that decrease local pH, stimulate the production of mucus by intestinal epithelial cells and induce the production of immunomodulatory cytokines, which can all have an effect on the pathogenetic mechanisms of various diseases.

Prebiotic fibers are common natural ingredients in a variety of foods, especially in whole grains, fruits, vegetables (mainly bulbs), and legumes. Although some foods contain significant concentrations of prebiotics, these foods are rarely found in most Western diets (with the exception of the typical Mediterranean diet). Various prebiotic fibers, such as psyllium are commonly used as a dietary supplement. The consumption of indigestible fiber or a combination of different prebiotics helps to increase the diversity of the microbial population in the intestine. This practice consists of a typical recommendation for the most pathological conditions.

To qualify a living microorganism as a probiotic, it must meet the following criteria: (1) to have a beneficial effect on the host (2) to be non-pathogenic and non-toxic (3) contain a large number of viable cells (4) to be capable of survival and metabolism within the gut (5) to remain viable during storage and use (6) to have good organoleptic properties and (7) to be isolated from the same host species to which it is administered.

Probiotics have long been used as therapeutic agents to improve gastrointestinal health. Although many microbial species have been suggested to be beneficial to humans, there is still no clear definition of what constitutes a healthy microbiome in a particular individual. Most of the available scientific information concerns the genera Bifidobacterium and Lactobacillus and as a result, most commercially available products contain microorganisms from both of these microbial genera.

Probiotics have been shown to provide a number of health benefits and they can be used to alter the gut microbiome and thus as a treatment of certain gastrointestinal conditions. Within the gastrointestinal tract, probiotics play important roles, including maintaining intestinal barrier integrity, regulating mucus secretion, controlling immunoglobulin A secretion, and the production of antimicrobial peptides, which affect the production of cytokines (among others). In clinical studies, probiotics have been shown to have beneficial effects on non-alcoholic fatty liver disease and ulcerative colitis.

Artificial sweeteners are designed to enhance the taste of food without the disadvantage of caloric intake. Thus, in theory, at least, they benefit our health, reducing weight and increasing glycemic control. These agents are commonly used in a wide variety of foods, beverages, and products designed for diabetics and dieters. However, the latest evidence suggests that these chemicals lead to glucose intolerance (hyperglycemia and diabetes) by inducing changes in the composition and function of the intestinal flora, changes that are actually responsible for glucose intolerance. Artificial sweeteners may therefore have contributed more to the obesity epidemic than to the fight against it.

As it is already known, the gastrointestinal tract is based on a 24-hour circadian schedule that predicts and prepares for the changes in the natural environment associated with day and night. These circadian rhythms regulate a number of gastrointestinal functions, such as the production of gastric acid in the stomach, the absorption of nutrients in the small intestine, and the motility of the large intestine. These rhythms are also powerful regulators of immune processes and the gut microbiome (number, species, and function). This occurs through the two-way communication between the central nervous system and the immune system and it is mediated by common chemical signals (neurotransmitters, hormones, cytokines [gut-brain axis]) and the direct innervation of the immune system by the autonomic nervous system.

The prolonged reduction in sleep time and the accompanying stress response results in a continuous, non-specific production of pro-inflammatory cytokines, which leads to low-grade chronic inflammation. Epidemiological studies have shown that the optimal sleep time is about 7 hours. This is also the time associated with the lowest prevalence of cardiovascular diseases.

Recently, attention has been focused on the increase of certain cytokines due to sleep disorders, such as increased TNFα in patients with inflammatory bowel disease, which may increase the risk of disease exacerbation.

The association between exercise and various bowel symptoms has long been established. Exercise and good physical condition shape the tone of the pneumogastric nerve, which is an integral part of the brain-gut axis. The effect of contraction of skeletal muscles caused by exercise is the strengthening of the immune system through the release from the muscles of special anti-inflammatory cytokines, the so-called myokines. In addition, there is a reduction in Toll-like receptors at monocytes and macrophages, receptors involved in many inflammatory processes and cancer. Physical exercise and intestinal microbiome have many common immune-metabolic and physiological processes, particularly studied in relation to cardiovascular health as well as the prevention and treatment of gastrointestinal diseases such as irritable bowel syndrome, non-alcoholic fatty liver disease, and obesity.

Many studies now emphasize the need to develop new dietary strategies, according to which personalized diet and exercise protocols will be used to restore microbial balance.

You can check the intestinal microbiome and the entire function of your gastrointestinal system, with some of the specialized laboratory tests (EnteroScan®) of Diagnostiki Athinon.