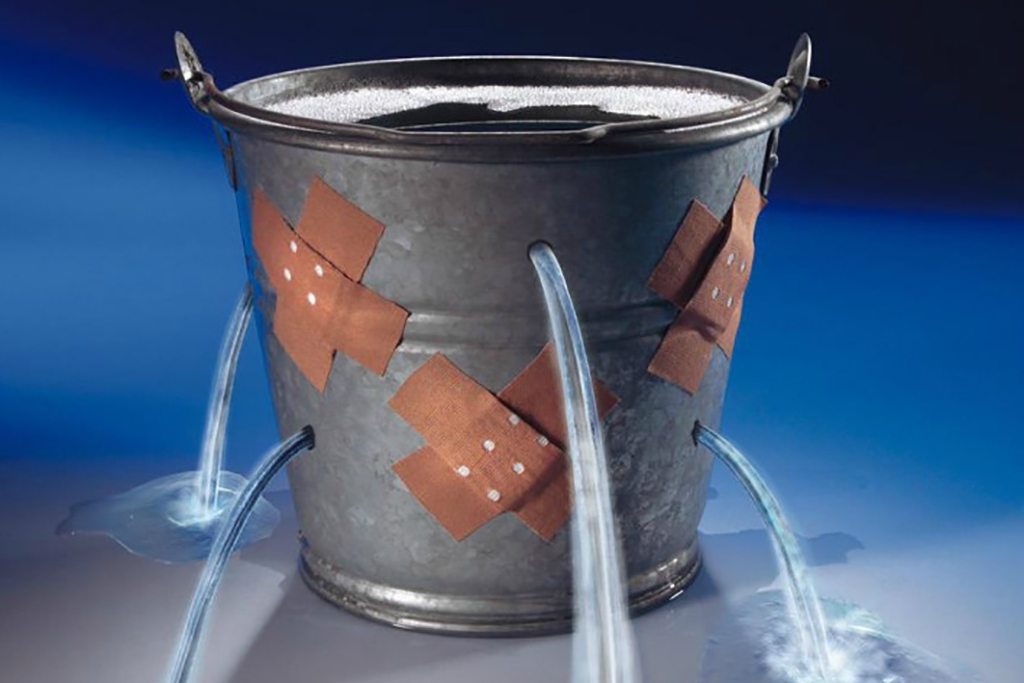 The intestine is often called the cornerstone of the body's health, and the digestive system as the "mother" of the body, as it nourishes all the other organs and provides the first line of defense against "foreign" substances.

Leaky gut syndrome constitutes a gray area in terms of diagnosis and etiology, however, it is considered the underlying cause of a large number of chronic diseases.

What is leaky gut?

A simple definition of the leaky gut is the following:

The inner side of the gut is lined with a single layer of cells, which constitutes the mucosal barrier (the barrier between the inside of the gut and the rest of the body).

The intestinal barrier is effective, on the one hand, in the absorption of nutrients, but at the same time prevents most large molecules and microbes from passing through the intestine into the bloodstream, a condition that could cause extensive symptoms.

In some cases, this barrier can become less effective and cause "leakage" from the intestinal lumen into the bloodstream, although this alone may not be sufficient to cause serious problems.

The intestinal epithelium acts as the first line of defense of the immune system, forcing the molecules that are going to enter our body to go through a process of "sorting", via special cell connections (known as tight junctions). In this process, the important nutrients are absorbed while harmful molecules (such as toxins and large indigestible food items) are removed.

However, in some cases these tight junctions become very permeable, allowing unwanted molecules to enter the bloodstream. This is referred to as "leaky gut" or "increased intestinal permeability".

Obviously, when a “foreign” molecule violates the defense system, the body tries to get rid of it. The first checkpoint is the liver, which provides a second selection process (similar to that of the intestinal wall) in order to remove all the "foreign" molecules.

However, in most cases, when the intestinal epithelium is leaky, the flow of “ foreign” molecules exceeds the liver's ability to deal with them and thus begins to be accumulated in the body.

At this point, the immune system produces antibodies against "foreign" molecules, in order to neutralize them. A key point to emphasize is that the immune system has ‘‘memory’’. Therefore, when the immune system encounters the same food for the second time, it is likely to react similarly to it. This is the key mechanism behind food sensitivities and intolerances. This activation of the immune system can also lead to inflammation.

Signs and Symptoms of a Leaky Gut

What causes a Leaky Gut?

The following conditions are among the possible causes of Leaky Gut Syndrome:

Other common causes are infections, toxins, and foods such as sugar, dairy products, alcohol, and especially gluten.

When food that contains gluten reaches the intestine, enzymes that are produced in the intestinal mucosa break down gluten into its simpler substances, the peptides gliadin, and glutenin.

As the gliadin and glutenin peptides are located within the digestive system, the immune system of the intestine, which is called gut-associated lymphoid tissue (GALT), can evaluate them as potentially harmful substances.

When an individual does not have gluten intolerance, the proteins are absorbed effectively. However, in individuals with gluten sensitivity or intolerance, the gut-associated lymphoid tissue evaluates gluten peptides as potentially harmful substances and antibodies are produced in order to neutralize the threat.

When the body produces antibodies to defend itself against gluten peptides, the intestinal barrier may be disturbed, reducing its ability to absorb nutrients and making the intestinal wall "leaky", allowing many substances to enter the body. This can manifest with digestive symptoms, including flatulence, constipation, diarrhea, weight loss, malabsorption of fats, and poor nutrition in general.

Gluten also stimulates intestinal cells to release a protein called zonulin. The role of zonulin is to regulate the opening of junctions between intestinal epithelial cells, a necessary process for the efficient absorption of nutrients. However, in people with gluten sensitivity, the connecting junctions remain open, allowing much larger (potentially harmful) protein molecules to enter the bloodstream.

When tight junctions are left open, there is a "leaky gut" and various harmful elements such as bacteria, toxins, heavy metals, and indigestible food particles can leak through the gut into the bloodstream. When these elements pass into the bloodstream, they are transferred to the liver, resulting in the appearance of "pressure" on the liver function. This explains why most patients who have a leaky gut syndrome for a long time, eventually show problems with liver function.

The leaky gut syndrome is known to have a strong association with Candida overgrowth. Candida can cause problems when hyphae (pseudo-hyphae) begin to develop -  a long, branching, filamentous structure of a fungus. These structures can invade the cells of the intestinal epithelium, causing inflammation and rupture of the intestinal barrier.

The abuse of antibiotics causes serious concern worldwide. Antibiotics reduce the friendly bacteria in the gut (intestinal microbiome) that provide protection against infections throughout the body. The gut microbiome produces substances that protect the gut. The reduction of friendly bacteria can allow the overgrowth of pathogenic microorganisms, a condition that can potentially cause inflammation, leading to a leaky gut.

The 4 steps for the treatment of leaky gut:

A 4-step (4R) practice is used to treat leaky gut. This program includes the identification and removal of eating habits and lifestyle factors that can damage the gut and the replacement of missing factors in order to add nutrients to the gut that help its healing process.

Remove: All foods and drinks containing gluten, sugar, alcohol, conventional dairy products, and any other foods involved in other intolerances, stress, and non-steroidal anti-inflammatory drugs should be avoided. If there is an overgrowth of unwanted bacteria or fungi (dysbiosis), it should also be treated with appropriate measures.

Replace: Digestive enzymes (and betaine if needed) can be used, because the normal production of digestive enzymes and stomach acids may not be sufficient in leaky gut syndrome. Ensuring adequate digestion of food helps to absorb the nutrients and prevent the unwanted use of indigestible food by certain microbes of the intestinal microbiome.

Repair: Healing of the digestive system is achieved with nutrients such as L-glutamine, aloe vera, curcumin, fatty acids, and vitamins A and D. This step is very important, given the fact that in an unhealed intestine, many food intolerances can grow and it can result in a failure of complete remission of symptoms.

In conclusion, the intestine is the key to the good health of the whole organism and a leaky gut is the beginning of many pathological conditions. Hippocrates summed it up 2000 years ago when he said that "all disease begins in the gut" and that “death sits in the bowel”.

All health improvement programs should begin with an evaluation of bowel health-related symptoms as well as the corresponding laboratory test (e.g. EnteroScan, leaky gut test). The appropriate program (e.g. 4R) can then be used to treat the bowel and lead to health restoration.